Tavan Bogd (five saints) is a soaring cluster of mountains that straddles the border between Mongolia, Russia and China. The range includes Khuiten(Cold peak), Naran(Sun), Olgii(Land), Burged(Eagle) and Nairamdal(Friendship) and Uuls(Mountains). The stunning  region stretches south from Tavan Bogd and includes  the twin lakes of Khoton Nuur and Khurgan Nuur (and the less interesting Dayan Nuur), which are the source of the Khovd river that flows to Khar Us lake in Khovd province. Despite its remote location, the park and its beautiful scenery make it the premier attraction in western Mongolia. Divided from China  by a high wall of snow-capped peaks, the area is a trekker’s paradise. Altai Tavan Bogd is the biggest national park and it occupies 636,161 hectares of pristine landscape along the border of the western part of Altai sums of Bayan-Ulgii province where Kazakhs (5% of Mongolian population) live. One of their interesting activities is they use golden eagle and falcons for their hunting. During winter months they take their Golden Eagles out to hunt for small animals for fur and meat. This is an old tradition, which is celebrated as festival of horsemanship, hunting skills and knowledge. The highest peak of Mongol Altai is Khuiten Peak of Tavan-Bogd range, with the absolute height of 4653 m above sea level. For sheer beauty it is in no way inferior to that of Matter horn of Switzerland. Sharp-edged rocky ridges of Altai, with eternal snow-caps, attaining an average height of over 3000 m, are full of deep gorges through which foaming streams of glacier-fed mountain rivers dash down. Snow-covered peaks soar into the cloudless sky and the frozen glaciers glitter in the sun's rays the Tavan-Bogd range and peaks dimmed with a light-gray cloak of snow particles rise up into the sky. This place protected by government in 1996 by parliament resolution No.43. The national park with its amazing beauty embodies the special characteristics of high mountains, icy crystal rivers, mountain valleys, steppe landscapes and ecosystems. Also, it is a habitual a blast refuge for mammals like argali, ibex and deer, and bird species like eagle and lammergeyer. There are exceptional and largely unexplored area, within the peaks and valleys of Mongol Altai Mountain Range. 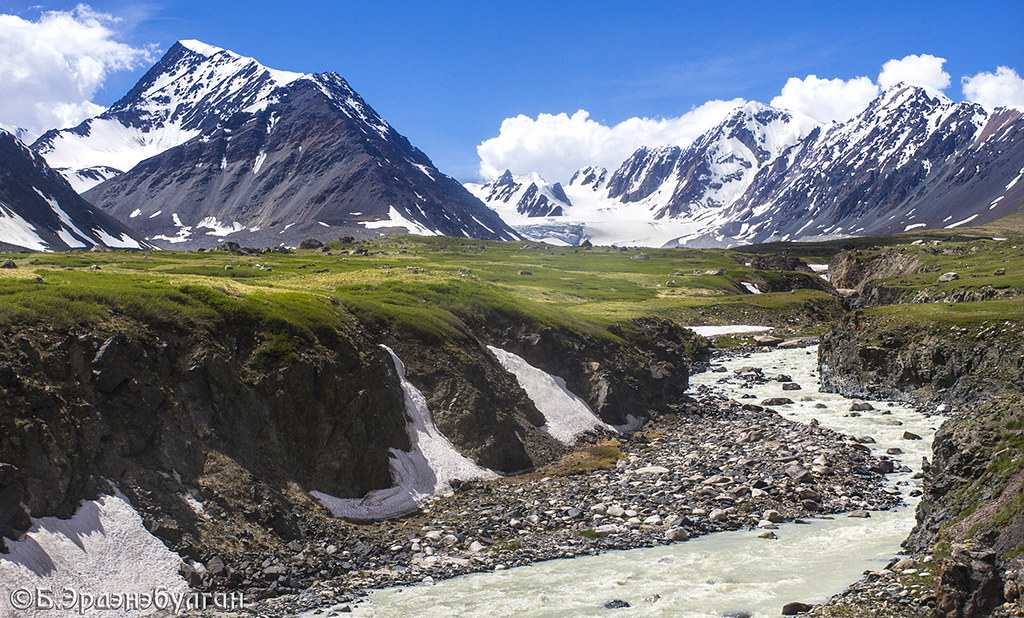